Women’s House: A Oneself Community

“Kaira Looro Architecture Competition 2021: Women’s House” took place to eliminate all forms of discrimination and to promote gender equality and female empowerment in Africa. The challenge of the competition is to design a women’s house that aims to promote gender equality as a key factor in rural development. The structure must be a space dedicated to hosting activities which focus on education, raising awareness, and developing the village in the name of equality.

I decided to enter this competition as an experiment in architecture design in May 2021 with the hypothetical objective of designing the architecture that can help lifting a quality of human’s life.

According to the information provided along with the additional research, there can be seen that the problem of gender equality can be divided into 2 aspects; First is the physical problems while the latter is something to deal with mentality. The physical problems as we knew, it could be described as a limitation of the accessibility in education and the lack of facilities in many countries in Africa. However, the mental problems are yet to be considered too, to lift the expectation in solving this problem. Mentality issues could be involved in these subjects, such as the lack of self-esteem, some issues in their believe, and their cultures, etc.

The project tended to focus on not only women alone, but also men. Even though the main subject is a women’s house, but arguably, when gender is mentioned, that means people is still being categorized and that might still be questioned about an equality. Therefore, hypothetically, if an equality is the main idea, neither women nor men should not be mentioned, but a focal point of the project would rather be shifted to see more on “humanity” and could consider this project to be “a oneself community”. consequently, the programs, space, facilities, of this project have been carefully thought and designed for everyone.

Furthermore, the project approach was not only to design a conceptual architecture, but also required to think more about the possibility to build and be inspired by local traditions as well as to use as much local material as possible. Therefore the area of study such as, the gender equality problems, local traditions, topography, climates, religion, local building material, and local architecture, are the subjects that had been studied through.

In conclusion, this project could expectedly become another experimental project to prove one of the aspects of architecture that; Architecture could be a medium to help people to improve their quality of life, as well as could provide the space that can encourage people to be able to lift to their potential. The result of the project was not only the conceptual and preliminary design drawing, but the project was also required to be able to build by the local builders and under the certain budget, therefore the conclusion of this project is also to declare further on the cost estimate as well. And another part of the project conclusion is as follows.

To design the architecture that could help to encourage women to gain more self-esteem and more potential to be ready to live in the society with confidence as well as to provide the place that men can learn to be open-minded and to see what women are capable of so they can learn how to treat women equally.

DESIGN
A problematic Issues
From the information provided, with additional research, it can be seen that the problem of gender equality can be divided into 2 aspects; First is physical problems while another is to deal with mentality. The physical problems as we knew, it could be described as a limitation of the accessibility in education and the lack of facilities in many countries in Africa. However, the mental problems are yet to be considered too to improve the progress. Mentality issues could be involved in these subjects such as the lack of self-esteem, some believe, and some cultures, etc.

A oneself community
When we say word “equality” that means we’ve valued them as an essential condition of being human. However, in this project, we might possibly need to think from different angle, mindset on this project would rather be shifted to reflect more on “humanity” and could instead consider using the word “oneself”. To achieve knowing oneself, a self-esteem is the core feature be considered.

It is very important that women must know and believe in themselves before others do. To do so, they must be encouraged what they are good at, what they are capable of, what their potential are and how to achieve that, and more importantly, to make them be proud of who they are and what they do. Once they can come across that, so they will be prepared and ready to improve their education and skills. On the other hand, to achieve this community means that every everyone in this community needs to learn about themselves and others. So, men will also
be a key in this circle, and both women and men must understand each other. They need to learn what women are capable of as well as to believe that women can also do things as good as men. And then there will probably be no more “equality” as they are now at the same level, a human.

The Programming
Programming is considered with both the design brief and the aforementioned problems. This project will be comprised of management area for 8-10 people, storage, meeting room, first-aid room, and multi-purpose room for education and library. Not only that, but the project also comprises a middle open courtyard as a central gathering space with an amphitheatre to be utilized in a winter and summer time

Conceptual idea and strategy
Centralize the decentralized – community. The idea is to generate the sequence of the activities. Firstly, to centralize the community by gathering everyone in through one entrance, no priority, no hierarchy, no gender, only one way in and out. Encouraging their focus to one direction using the wall panels to lead their vision, and once they got in, a sense of direction will continue leading people to the destination.

However, once this journey is completed, the program will now be decentralized, and people will start a new one with their own choice. No pressure, no manipulation, they can freely select their own activities if it’s available. To do that, the architecture is designed to have an open plan so they can see all the activities all at once. The enclosures are limited to where necessary such as bathroom, office, etc.

Therefore, a form of the architecture starts with a circle in a donut shape with a courtyard in the middle to create a gathering space while preventing from the external environment, then it’s pierced with an approached entrance to create a pathway.

To layout the programs, the connection between 3 main functions were considered as a triangular link. An invisible triangle shape was integrated into the donut. Solid wall panels then were deliberately generated on that triangular line to define where the open space and where the 200 sq.m.- enclosed space will be. All sceneries are carefully thought and selected what to be seen and what needs to be hidden in each program.

Then the functions will be considered along with the form. A wall with visually connection between activities were done using brickwork with a see-through pattern as well as integrated bookshelves wall. A function that needs partially privacy like a meeting room was considered using a pond to physically control the accessibility but still allowed to visually connect to the main court.

All in all, it can be seen that the core idea is to gather the people into this community, both women and men, fading themselves from their former life, and encouraging them to restart their new mindset by creating an architecture with a new open environment with no boundary in activities, knowledges, and communication, so later, they can presumably leave with their new potential.

MATERIALS & PROPOSED METHOD OF CONSTRUCˇION
Main material in this project is earth brick because it could create a solid wall, a see-through wall, and a breezed black wall. It could be versatile with different patterns. It is also easy to find, it’s local and not expensive. In terms of the looks and feel, it’s raw and don’t need much of maintenance so it could show its true beauty even when the time has passed.

The main structure from the ground still needs to be concrete for the building’s floor with Clay Brick finished. The courtyard in the middle can still be earth. The roof structure will be using timber columns with timber beams and rafters. The roof will have to be a lightweight material, and because we need a very shallow slope to keep the mass of the building as light and clear as possible, the corrugated roof is the main candidate. Some of furniture were also proposed using a tire with a wooden top covered with a local fabric for internal use, and with a raw timber finished for the outside furniture.

The construction is very straight forward. Starting with a survey and locate a donut shape. Then do the main foundation and find other lines of triangular axis walls and do the support with the one that need it. Forming the formworks for a casted concrete floor. Then start the plumbing. Casting the floor with a Clay Brick finished. Next is to work on the columns, as it can be seen from the lists of material, a timber post is very thin, so the idea is to assemble 4 of them for 1 column with bolt to gain more compression load and leave a rebate on the top to joint beams and rafters and adjusting the level of the rafters in order to get a right slope for the roof.

About the wall, study the brickwork and calculate the bricks before start. When it comes to the door frame, the concrete column and lintel need to be casted before installing the door frame. After finishing the wall, install the roof to prevent the building form the weather. Installing doors and windows and the sanitary wares. Then after the whole construction process, we gave some idea to use a used tyre to make some furnitures. Its top could also be covered with local fabric to add some gimmick to the project as well. 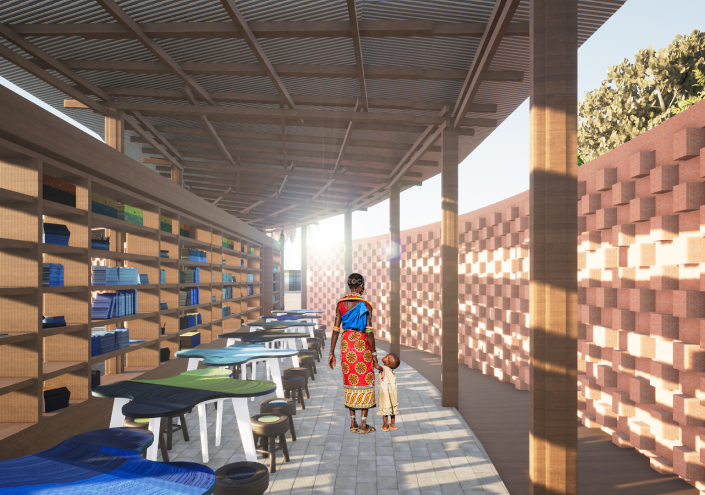 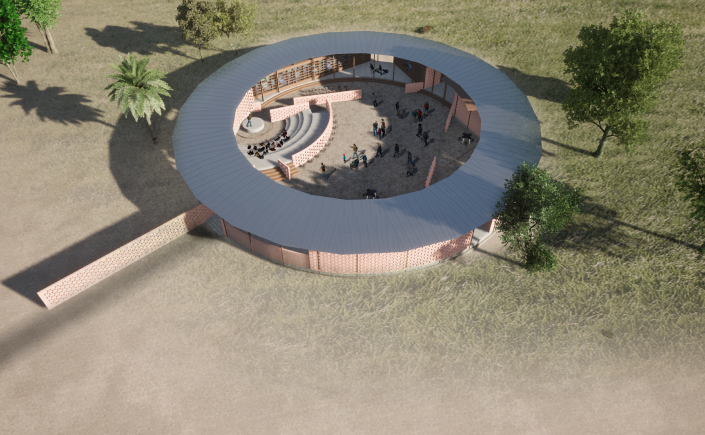 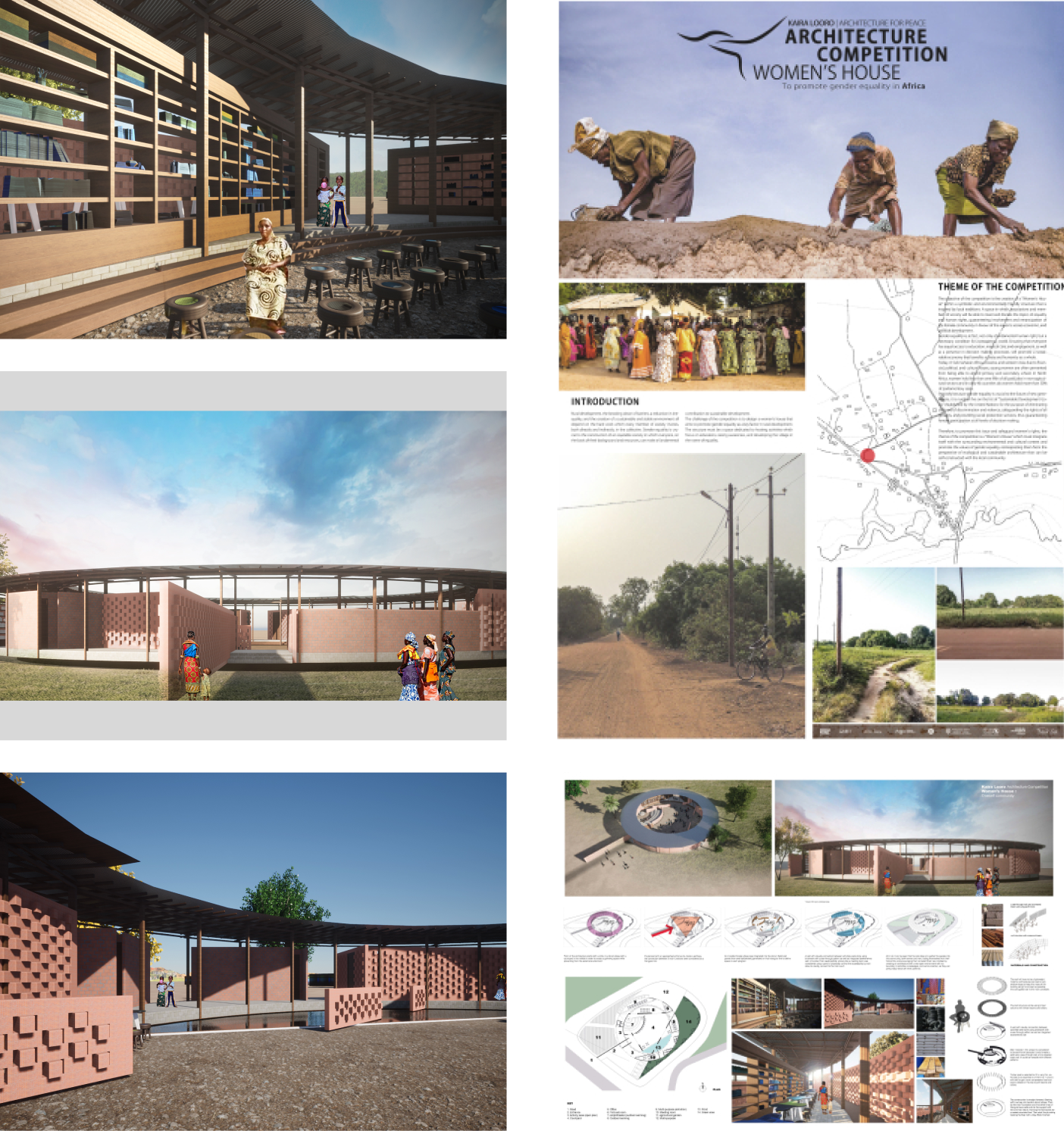