Visual symbiosis: Seeing creatures in nature with the simple human eyes through a semi-abstract photograph.

This creative work study the relationship of objects in nature in a space imitating nature, This leading to the creation of photographs that express the symbiosis of objects with a simple look and focus on looking realism at both concrete and abstract to semi-abstract in a nursery area that mimics nature to capture images using a camera mobile phone taking pictures of objects the images are then digitally printed on Luster photo paper, then displayed and install photographic works showing the relationship between 2 images as 1 work, totaling 6 works.

The resulting works are the simplicity of the attenuated state of matter in nature created by human and nature. The rough surface of concrete with the moisture of the water conducive to life to spread through the shade of large leaves under the factors of light, water, air between living things with different environments, but can coexist by interdependence under the different coarse surface of the concrete surface is conducive to the adhesion of moss under the opacity of the foliage that does not shine to the ground, it helps shade and preserve the moss plants. In addition, the relationship between objects was also seen when taking photographs of each work by combining two images together, it was found that in the same image, there were both concrete and abstract expressions from the same object in the same image, resulting in a new interpretation of the image into a semi-abstract. There was a collaboration between concrete object, background, textures, traces and shadows of the abstract objects in the two images create a close interaction with the normal human eye until they meet in the middle of the view from the left and right eye It is a view together by bringing together two images that work together. that have a mutually supportive visual symbiosis.

Simplicity of the attenuated state of matter in nature created by human and nature. The rough surface of the concrete with the moisture of the water conducive to life to spread through the shade of large leaves under the factors of light, water, air with the shade of leaves to moisten the moss plant pieces. It is the structure of the relationship between living things and the environment in which they live. The dense, moist leaf opacity prevents sunlight from reaching the lower ground. And also retain moisture to support each other with shade humidity and water vapor express the difference in the coarse texture of the concrete, contributing to the adhesion of moss visualize the gap area by minimizing the object to allow the workspace to express a feeling of independence is the symbiosis of two organisms to pass on meaning for further thought.

In addition, in the presentation of photographic works creator also visualized the relationship of objects. When the images of each work by combining two images together. This results in a change in perception by transcending the way of thinking. and limitations in looking at concrete and abstract forms was found that in the same picture there were both concrete and abstract objects from the same object in the same picture. This results in a new interpretation of images into semi-abstract by the interaction between concrete objects and backgrounds, textures, semi-abstract traces. and shadows of abstract objects to the interaction of visual relationships as a result of viewing images with a close look at the eyes of ordinary people. There was a meeting in the middle between looking from the left and right eyes to see together by bringing together 2 images that work together between objects, content, surfaces that are mutually supportive.

To study the relationship of objects in nature in a space imitating nature, This leading to the creation of photographs that express the symbiosis of objects with a simple look and focus on looking realism at both concrete and abstract to semi-abstract.

Seeing comes before words. The child looks and recognizes before it can speak. (John Berger,2008)

Photos and memories are as certain as they are today. So what we see on paper is certain, it seems as though we are truly touched or involved in the event. An indication of a photograph in and of itself with the idea that other people can talk about photos but not the real photos. Photographs become invisible. and we cannot see or truly understand it photograph must therefore be described in the subject matter. The specific context of it because the subject in the photographs realized in a specific moment in times. The photograph confirms that the subject is frozen for a period of time (Freezing a Subject in Times) and that the subject suddenly exists in the past. photo questions which is like bringing the past to the present and freezing the principal under the times of the past with the expression of what appears in the picture is still being preserved. Just like studying myths, we need to read the picture by looking at it at 2 levels. The first level is to look at the visual elements of the picture or the language that appears in the picture that will make it easier for us to read the picture? It clearly reflects the direct meaning denotation with the mythological reading that will reveal something that is obscured by the implied meaning. connotation. (Suddan Wisuthilak, 2018)

Photographs may contain elements that emphasize mystify in the sense that they are more difficult to interpret than direct communication. We may have to rely on both concepts. cultural understanding and historical context to help interpret the conceptual code hidden in the picture. At the same time, the photos are simple and clearly in communication (Clarify) may hide the complexity more ingeniously. consideration to see something or many things in a photograph, there is an element of training in order to have an eye with the photographer. On the other hand, viewers can also consider images by using their own eyes together with the eyes of others for consideration as well. with collective eyes, the meaning of seeing or perception of the world through the eyes therefore It has the nature of letting ideals, beliefs, and rules and powers flow into our bodies through vision. Transferring the spontaneity of photographs of friends leads to an understanding of another culture. So it’s never that simple. or according to the aspirations of photography from the beginning on the other hand, it was the natural expression or the impression that there was no camera for the people in the field that matter. Because that might make sense that a photographer or anthropologist is being spoiled by having others look at them more than the camera Indeed, photographs with a natural appearance It is a sense of urgency to intervene and challenge the legitimate authority of anthropologists to collect information and present stories. In other words, it is Those natural photographs are the presentation of their self-awareness to anthropologists. Anthropologist interested in the history of anthropological photography like Elizabeth Edwards said that the picture looked unreal. or not natural It reflects what the anthropological nature of nature is like. Therefore, the natural character of the photographs is of vital importance to the legitimacy of the visual anthropological work under this concept. (Sorayut Aiemueayut, 2018)

Human beings are dependent on the environment and the environment. The most well-known symbiotic relationships are animals and plants grown by farmers. Humans have many other biological beings, relationships that support and sustain our lives as well. Increasing numbers of people are beginning to realize that it will be of great help to humanity for all other living things on our planet. If we can improve these symbiotic relationships Humans live in close interdependent relationships with many other living things. When various beings coexist with one or both of the benefits, this is called symbiosis or Mutualism. The inseparable relationship leads to a shift in perspective from composition to holistic. It is thought from the perspective of relationships. Considered to move the focus from the object to the relationship that is linked to each other. (Fritjof Capra, 2013) to convey their understanding of weaving and interdependence A new scientific understanding of the systems of life conveyed through the depths of ecology. It is a difficult task to debug that will lead to an understanding that requires a lot of judgment on the face of life. It is a challenge of the need to learn, recognize and pursue the magic of work until it becomes something that we must eventually understand. and it must be regarded as the future of the wisdom of the open self. and moving in the depths that are always connected to the oneness that arises with the world in the name of life. (Fritjof Capra,2010)

From the above concept creator have selected and applied only some of them. To lead to the creation of works that begin with an interest in plants that are naturally beautiful so began to watch and question the change in the timing of the withered leaves showing incomplete dentition, that most people tend to overlook the beauty and do not see the value of things that have changed. But creator have the idea and feel that things are beautiful in their time. Therefore, I want to convey that feeling according to the feeling and experience of looking at things that reduce everything naturally, let everything go by itself. Whether deciding on a place, area, or object by looking for objects in the simplest and unconditional way by choosing the most common places where living things, space, time, and the relationship of things that support and support each other is chosen. Filter until the difference is left in the opposite pole is living between plants and concrete under the moisture generated by water the dependence of nature in the area of moss living in the shadow of the leaves of plants, starting from looking at the realistic reality that is conveyed with its unique shapes and colors, it creates a feeling of fun, enjoyment, and then slowly relaxes from the concrete to the abstract. until the relaxation occurred throughout the period of creation of more and more works respectively. Then began to gradually reduce the content of the object. until able to connect realistic and non-realistic patterns that can express the relationship of looking at both concrete and abstract objects in the same picture between the leaf and the shadow of the leaf to find simplicity, man-made objects in nature, together with nature, between concrete floors and plants and the moisture of sapling plants to create concrete realism. and abstract within a single image as well as minimizing objects to allow space and objects to function until they can express a feeling of symbiosis, referring to the mutual benefit of living things and objects. The biggest difference is the concrete floor.

To study the relationship of objects in nature in a space imitating nature, This leading to the creation of photographs that express the symbiosis of objects with a simple look and focus on looking realism at both concrete and abstract to semi-abstract.

During this time of pandemic COVID19, one of the things to help maintain my spirit and keep me alive is plantation and Botanic. Through the process, I was stunned by the massive forms of flowers with their vivid color. The flowers are a powerful effect on the mood. The colors will trigger our emotions. With a variety of types and species, I create visual art by simply applying the mirror effect. Carefully placed animated images with the movement, colors, and transition to go along with the abstract sound that evokes the mood and feeling of mesmerized and mystery. 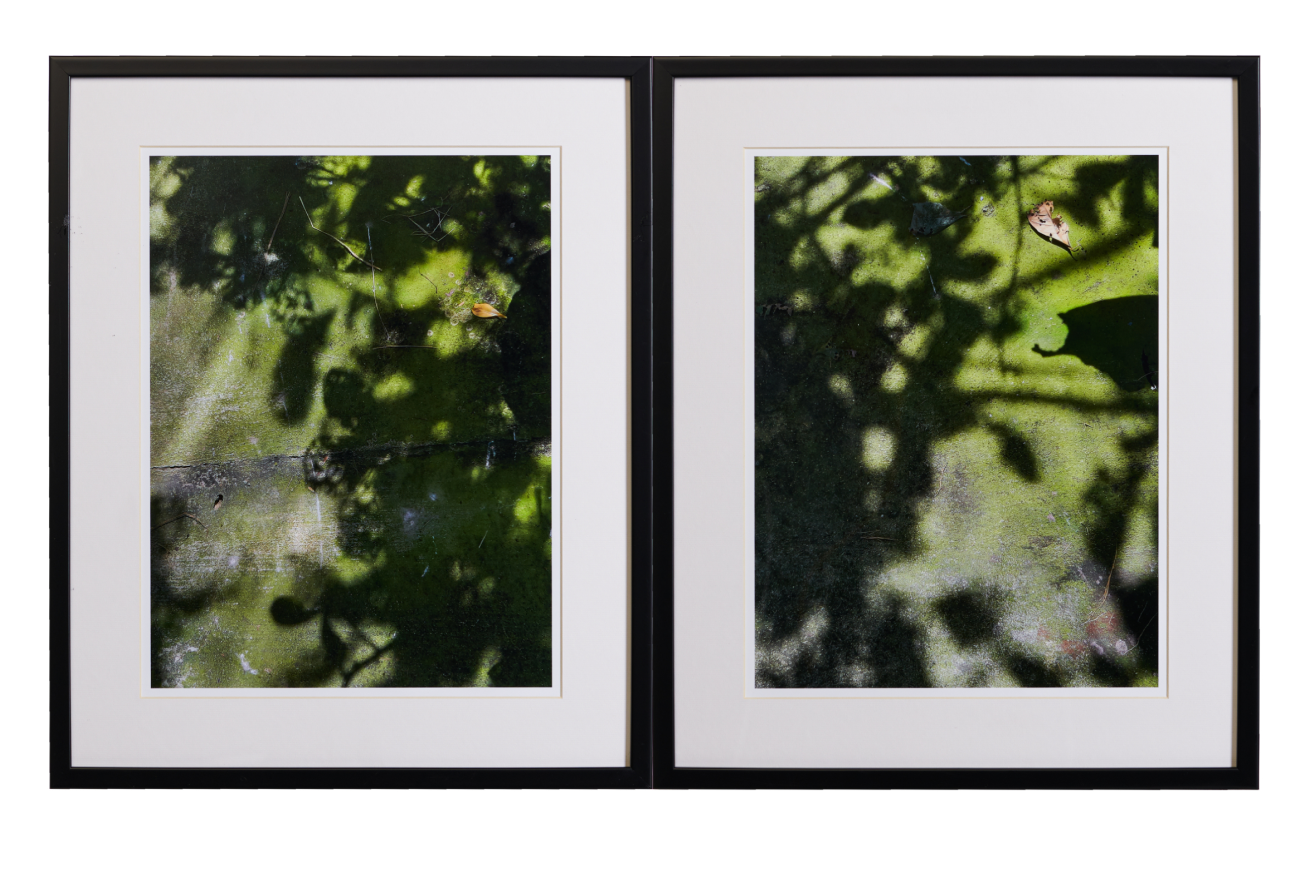