The Prototype Design of Urban Kiosks: The Case Study of Khaosan Street, Bangkok.

Khaosan Street is a world-famous accommodation area for backpackers and a colorful street market. In 2020, with the aim to develop into a pedestrian street with an international image and standard, BMA improved its physical environment and had the policy to reorganize the space utilization. Since the key elements of this crowd-pleasing space are the kiosks. The idea to develop a prototype of the kiosks that will be used in the refurbishing area was raised.

This project was initiated as a collaboration between the Faculty of Architecture and the Khaosan Road Street Vendors Association, with the Buddy Group supporting the design budget. 4th-year students under SOS Studio are responsible for design work under the guidance of advisors. In terms of methodology, the students applied the design thinking process. Data were collected and problems are defined by observations, interviews, and discussions. The design focused on 7 objectives, which are 1) strength and durability 2) easy disassembly 3) mobility 4) low construction budget 5) Thai identity, 6) product and environmental hygiene and environment, 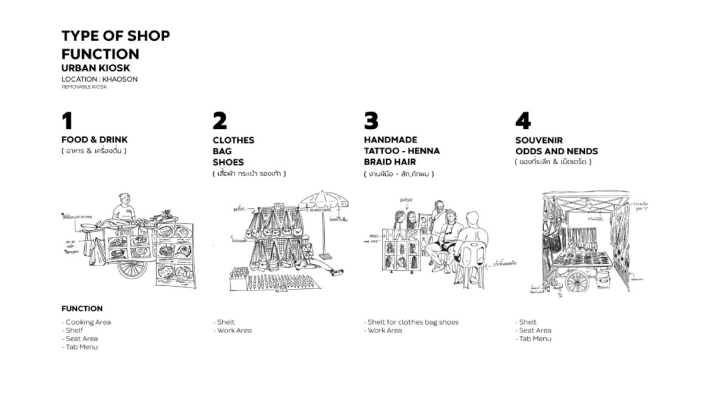 and 7) able to generate a return on investment for the investor. The kiosks were designed into four categories based on the type of products: food and drink, clothing, handicrafts, and souvenirs. The designs give importance to the existing way vendors perform with the kiosk on a daily basis but improved it in terms of images and details. Contemporary Thai motifs and Thai tone color were applied to present the contemporary Thainess. The budget for developing a kiosk is 30,000 baht each. Since most vendors may not be able to invest in developing their own kiosk.

The Khaosan Road Street Vendors Association wishes the kiosk could generate revenue back to the private investor by providing advertising space upon each kiosks. This is an innovative business model presented through design output. The idea and design have been unofficially accepted by the Bangkok Metropolitan Administration, unfortunately, the implementation is still not possible due to the epidemic and regulatory issues.

The kiosk prototype design project is a good design challenge that allows students to understand the possibility and potential of tiny movable architecture in place rebranding. Students had a chance to understand the usability of a very small space and details that are not commonly found in architectural works. They also learned the design process that required reference data from field surveys, observations, and discussions with project owner.

Although the look and feel of the design work might not look very different from the kiosks commonly found in indoor commercial spaces in Bangkok. But when examined in detail, the design has faced and tried its best to solve the problems of outdoor kiosks design that has always existed. Enhancing hygiene. Creating a unified yet diverse and vibrant image in a way that people on Khao San Street would appreciate. Allowing vendors an easy to modify and repair with common materials in the market. Building a weather-resistant kiosk for everyday comfort. Considering everyday transportation by creating an easy disassembly and movement. Most importantly, the design is planned to support a post-pandemic tourism. The collaborative design process between designers and vendors to create a more welcoming and sustainable environment for everyone is a good sign for more sustainable co-create public space.

The design satisfied the project owner and should be push to construction process, but has been slowed down by the sluggish tourism situation due to the epidemic and regulatory issues. The idea of having the private sector invest in the development of urban kiosks in order to create a contemporary and unified image of Khao San Street vending is not suitable for current regulatory conditions. Alternatively, developing a kiosk design approach to encourage individual vendors to develop their own may be a more appropriate approach. This will be our study topic in the future.

1. To design the prototype of urban kiosks on Khaosan Street to support
BMA’spolicy on environmental improvement and space re-organization and to
meet the new-normal-way of street commerce after the pandemic situation.
2. To support the place rebranding of Khaosan Street to the international standard
and image, highly focused on orderly, identity, value, and cleanliness.
3. To develop students’ design skills through hands-on experience.

The urban kiosks have been interpreted as the movable architecture that will turn Khaosan street space into a dynamic market space. The trade on Khaosan Street takes place almost 24 hours from early morning until late at night. The street which was only two hundred meters long has to be allocated effectively to accommodate 230 vendors. Each kiosk is set to be within 2×1.5 meters in size. Design thinking is therefore used in the design process as in general architectural design which are (Gupta, 2020);
1. Emphasized and defined design problems through a variety of methods, including observations, interviews, and discussions.
2. Case studies research.
3. Ideated and developed the alternatives for discussions.
4. Developed a final prototype for construction.
The most complicated process for students is understanding how the space is used in relation to product categories. The design required to be disassembled with simple tools in a short time and can safely move to the warehouse every day as the spaces need to be turned for other vendors. As this cyclical process of use happens every day, the kiosk has to be robust but light weight. Importantly, the design work must be simple and flexible enough to allow each vendor to adapt the kiosk to their own needs. The entire design process was developed in consultation with vendors’ representatives for further presentation to the Bangkok Metropolitan Administration.

We interpreted this kiosk design as a movable architecture to emphasize the importance of the kiosks as an architectural element in public spaces. Not only will the kiosks play a role in shaping the structure of the market space, it also creates a dense, circular, and dynamic mix of space. Furthermore, the kiosks are the important media to generate more conversation in these public spaces (Whyte, 1980). Vendors spend most of their time in a day here in any weather. They run their business and be local host to the visitors at the same time.

The stalls were originally designed by individual vendors with materials they could easily find at affordable prices. The image of the street is formed by various designs, although entertaining to tourists, lacks unity and order in the eyes of the government officials. On the occasion that Bangkok has developed a master plan and renovated the road to be a walking street. The idea of developing the kiosk with a unified identity and in line with the new pedestrian style was raised (Pornpetrumpa, 2020). The kiosks are expected to be one of the elements that play an important role in place rebranding from clutter to a pedestrian street with a unified and orderly image.

Visually, the students accepted the idea from vendors to design the impressively colorful kiosks that will proper for Khao San walking street. The students suggested choosing Thai tones as an alternative by applying them together with Thai motifs that have been applied to be more contemporary. Color and motif schemes were analyzed to suit the type of product. They offered both relatively light and dark tones as an alternative for vendors to consider, compare and make decisions.