The research study by Asst.Prof. Chawaporn Thammanitayakul, Ph.D. supported by Thai
Media Fund organization in Thailand was found that many digital natives or younger
generations today are suffering from cybersecurity issue. The study shown most of them are
in lower middle-class families and have inadequate digital literacy knowledge. They are
unable to deal with a digital problem and struggle to overcome with their parents. Raising
awareness of this issue was concerned, the researcher analyzed and digested information in
order to encourage intended parents and their digital natives’ children to obtain digital
literacy. To motivate audiences and create an effective media is focused on visual
communication design principles. The imaginative illustration and infographics can enhance
words/information and improve accessibility for audiences. Furthermore, applying a
storytelling technique can convey the message visually and easy to related a relevant
situation for audiences.

A design research process for this project was defined into five steps including; 1) design
Brief 2) concept development 3) Implementation 4) audiences testing and 5) preparation for
publication. The survey results of focus group discussion investigated that the use of
illustration with characters design and infographic element as a storytelling to engage
audiences, evoke emotions, and enhance learning experiences. The combination of
complementary color is considered to grab attention on audience testing process. The
illustration conveyed the concept design of ‘Step inside’ which related to the meaning of
stepping into the digital world and stepping into children’s mind. The effect of mentally
problem is concerned in what happen to our children. Consequently, an appropriate
illustration style is able to motivate target audiences and deliver a message of a particular
content understandably. The accomplishment of the project was determined to be a case
study for a visual communication design project for media approach. The book contains 70
pages both printed and digital flip book version throughout the online platform for an easy
accessibility.

The completed artwork was determined by the project’s committee members that the
illustration style can enhance information and improve the message effectively. The illustration
can motivate target audience to access the book, driven a meaningful and imaginative style
with the storytelling method. The book was printing in 5,000 free copied with an e-book version
available to easy access for a digital lifestyle.

By doing the process research of five steps;

The illustration offers a mood or emotion of happiness,
appeal, charm and expression of human touch. It can simulate and strengthening the
message delivered to audience. The graphic identity and infographic style applied in this
project are created uniqueness with clean and simple form. It can help audiences with their
understanding of words as well as useful for readers with learning difficulties to obtain a
content precisely.

The purpose of the Illustration book design project is to express knowledge and raise
awareness of digital literacy to parents and their children. Amongst the increasing online use rate of all generations, particularly in younger generation. There are many concerning issues on the digital activities that influences and effects our children’s developing behavior and wellbeing of digital experiences for their lives. Furthermore, understanding the knowledge about digital literacy can increase positive communication and strengthen a relationship between parents and children in a family.

The beneficial of illustration and infographic can convey an idea in a very clear and simple way to parents and younger generation. The content of the writing can be enhanced by motivated infographic and friendly character style. The book published in two version; printing version in a book targeted to communicate with parents and e-book online version aimed to approach to younger generation. The Illustration could help explain and clarify complicated content to create interest in a new topic and it hold people’s attention spans.

The Illustration book design project for “Lok Klom Klom Tee Riak Wa Digital” (Digital
literacy guide for parents and their children) presented the concept of ‘Step inside’ with friendly, simple and clean design. The design work involved in five steps of the process as the following;

The Illustration was started from a cover design with character design and graphic symbol of cyber/digital world to represent the concept ‘Step inside’. The concept related to a key message inviting parents to step inside the cyber world whilst realizing what their child might
be encountered. The cover design presented a friendly mother character in the front and
grayscale son character, holding electronic device and sitting from the distance with a giant smartphone in the middle between them. The illustration implied through a storytelling that an ignorance of cybersecurity may be a factor to separate apart parent and child. The use of storytelling can engage audiences, evoke emotions, and enhance learning. An audience will experience and recall the events of the story in a personal way and it becomes a part of them. (Lidwell, W., 2015)

About the book cover design appeared a generous mother in warm color outfit to convey full of positive energy to the audience. The Mother character was stepping naturally on keys of a computer keyboard direct to her son through a giant smartphone. The son, in grayscale was sitting on the floor and looking at his electronic device’s screen which communicate that a child may be left out or struggling on a cyber /digital world caused by an unsecure problem. The graphic elements including abstract shapes, cyber symbols and mathematics symbols laid down in a clean background were simplified a ready-to-learn new skill. The color of
illustration was given bright and cheerful feeling transferred a pleasant atmosphere to motivate parent to learn an essential digital literacy together with their child.

The illustration in the book carry on the storytelling with infographic explanation from
chapter one to chapter twenty consistently. In a chapter ten to twenty, the ‘son’ character was
changed to colorful represented a strengthen up feeling reflecting audience gaining more
knowledges of a content throughout the book.

The illustration design was developed from a sketchbook and applied selected color
scheme in Adobe Illustrator. Finally, the illustration of a book cover and all main cover chapters
were developed and layout with texts and add more infographics appropriately. 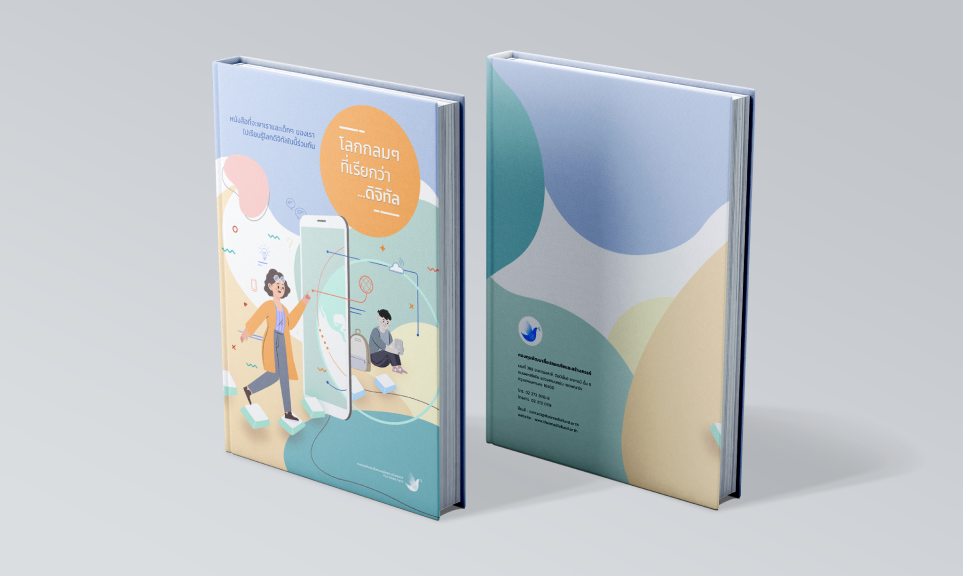 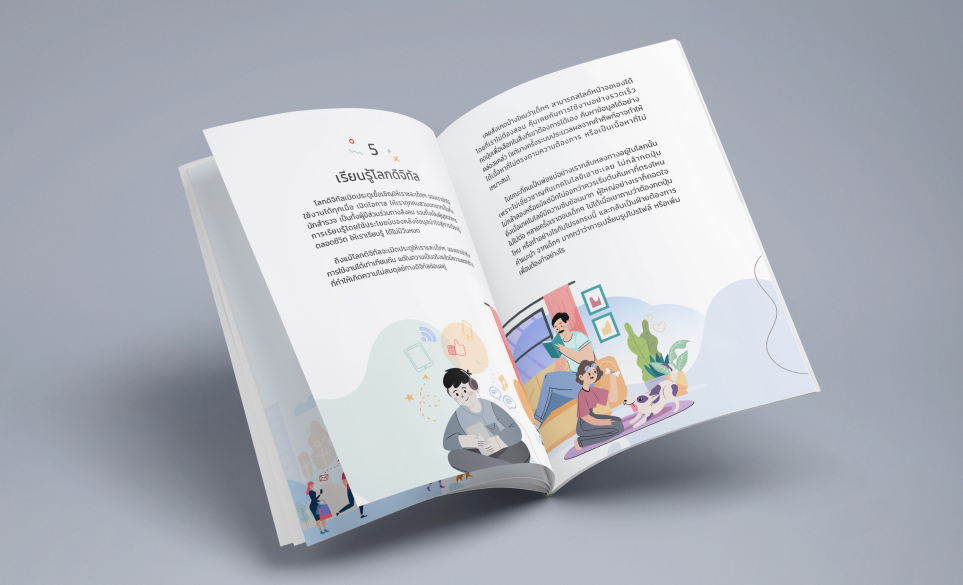 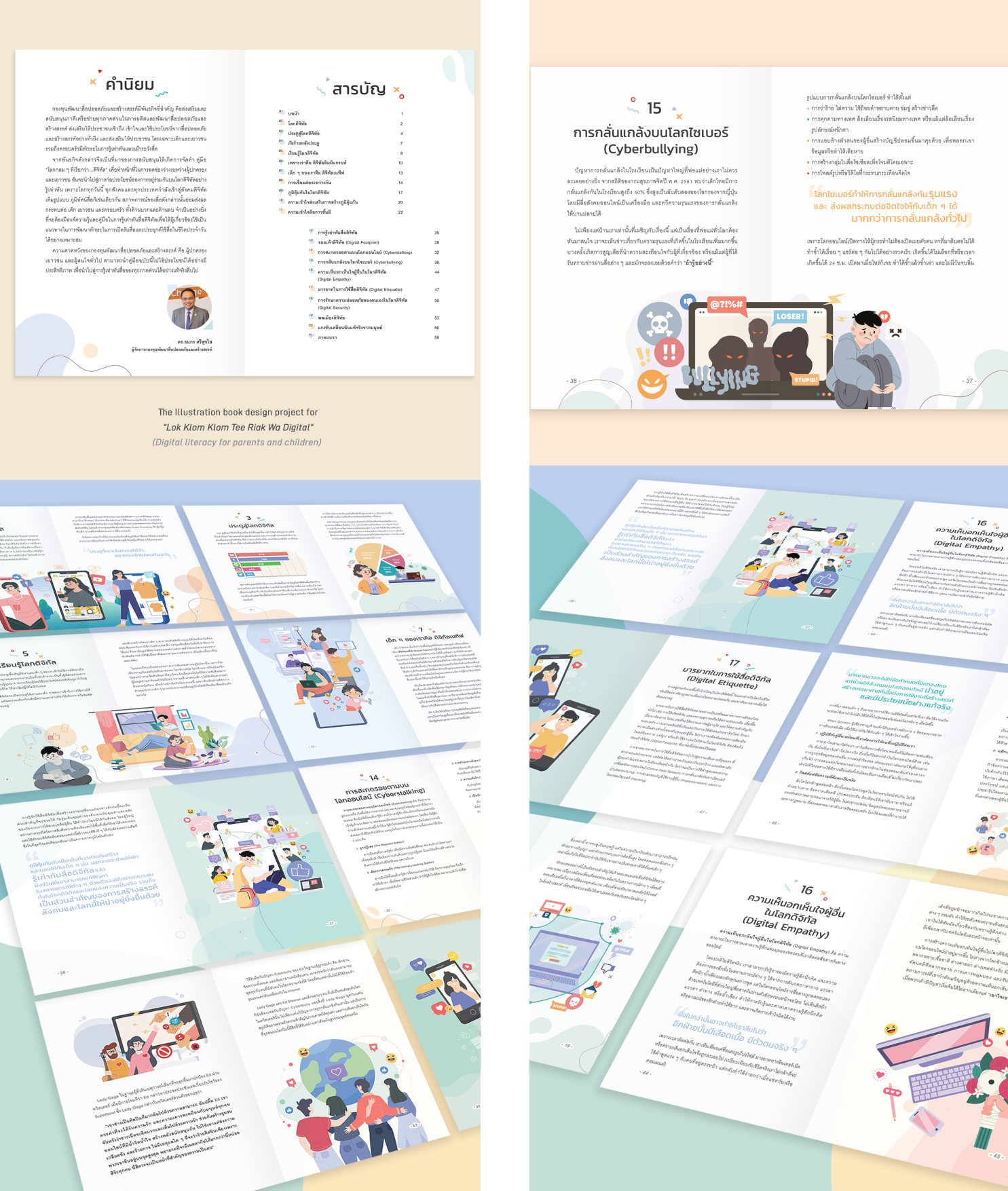