“Clusters”: The Experimental Art and the Study of Characteristics of Space When Occupied by Elements.

Spatial quality is always in awareness of practitioners in the fields of architecture and interior design. To serve the functions of activities is basic; however, to understand the characteristics of spaces is beyond. How we perceive the relationships between ourselves, elements in space, and space itself and how space arouse our feelings bring it closer to artistic quality.

For the experiment, it means to study the characteristic of space and present the result with artworks. Dot stickers are used as a tool to experiment the occupying on the surfaces of space and area to observe the differentiation happened in the space. The design of the art pieces are also planned to allow the audience to interact with the objects, the spaces, and the changes. The elements and presentation of artworks are aspired to imply some meanings of the critical situation that impacts the feelings of people today, such as the Covid-19 situation. Dot stickers are the representor of “cleanliness, disease-free, and safety”, and the illustrator of a cluster of people.

This work consists of 3 art pieces in the form of a small space study models, using an acrylic and frame box.

Acrylic cube#1: a space is created of when dot stickers are placed repeatedly. As the clusters of dots gradually cover the transparency of the cube shell, the space in the cube can also be gradually perceived.

Acrylic cube#2: The transparency gradually reduces when dot stickers are applied and the layers are filled, but the set of layers helps the perception of the eyes to combine all planes and leads to see as if the whole is a mass.

The frame: Studying negative space occupying by positive elements, dot stickers are pinned in the space of the frame. They are allowed to be selected where to place by the interacting audiences who need to decide the best place.

In artworks, occupying more space and area, dots become clusters. The “clean” space or the rest negative space that is available for more dots has been reduced. As in the Covid-19 situation, people who get infected occupy the space and area more and more, and our clean space or safe place is brought to be less and less. The artworks also aim to portray the meaning of the situation and motivate the audiences’ decision in select and interact with the positive and negative space when placing a new dot sticker. “Will you put your dot close to the cluster or as far aspossible in the clean area? But once the clean space becomes less, what will you do?”

Not only artworks have been created, but the study of space has also achieved its objectives. As an interior designer, we always work with a tangible space in the sense of realistic, providing a good space that fits best with functions or use is adequate. However, from the experiment model study, it is my first time observing the real act of a space occurring related to the change of simple elements.

All three art pieces convey the gradual transformation of space and mass occupied by dot stickers. Meanwhile, the cubes and the frame presentation and the use of dot stickers are simple tools to simply attract audiences’ interaction. In the acrylic cube#1, from the emptiness in the first place, the space is finally defined by dots. Also in the acrylic cube#2, the mass appears when the transparent layers become opaque planes by the occupying of the dot elements. The perception is deluded to combine all planes into one mass. Lastly, the frame of dot clusters represents the quality of positive and negative space when the clusters expand in the area.

Portraying the state of “clean” gradually changed to “full” of clusters, the artworks also hint at some meaning of the situation we have to face as our daily life is occupied by the situation of the disease and our clean and safe space has been run out. When a dot sticker is held in a hand before being placed on the artwork, it can represent all as a symbol of safety, a representative of one in a space, an element which transforms the space, and a creator of the clusters.

A simple characteristic of a dot is the power to draw attention. It is a primary basic element in art, giving the meaning of emphasizing, pointing out, and eye catching. Relevant to space and forms around dots, they affixes themselves in and initiate an interrelation. (Bradley, 2010) The power of a dot increases when another dot is placed next to the first one. The closer the dots are in space, the more the tension between two grows. When they come closer enough until touching or overlapping, the united dots form into a new object. The consequence of clustering dots creates a new different form of dot, or even a new plane. (Bradley, 2010) For the reason, in the experiment, the dots are used as a tool to create planes and shape a space or a mass.

Why it has to be “dot stickers”? Dot stickers are simple objects and uncomplicated to invite the audiences to interact with art. In artistic implication, in the conceptual relation to the situation of Covid-19, dot stickers can be interpreted both ways: first, attached prominently on our dress after passing screening area, they stand for a symbol of “cleanliness, disease-free, and safety”, and second, as an illustration of a cluster of people.

6.3. Design and create the experimental artworks

To study the characteristics of space gradually occupied by dot clusters and to create the experimental art pieces, two acrylic cubes and a frame are set as spaces and an area. The intention and expectation in this experiment and creation of the art are the interaction of the audiences by placing stickers inside the cubes and pinning stickers on the frame, creating the change in the art pieces and their spaces. However, the interaction is limited due to the exhibition situation that needs to be arranged online. Thus, video recording is used to capture the result of change.

Acrylic cube#1: The emptiness and invisibility of the space can be noticed in the beginning when the acrylic cube is totally clean. Placed by the dots continuously, the cube is gradually covered by the clusters. Until the clusters of dots act as planes, and the positive surfaces of the clusters have grown large enough to cover the negative voids and define the enclosure, then the characteristics of the space have been shown. By placing a dot sticker, audiences can be a part of the interactive creation of the space.

Acrylic cube#2: When the empty volume of space has been filled, or we perceive some degree of occupying in the space. Then we will observe a mass. (Bradley, 2010) From the reference, the study model has been set with 5 layers of acrylic plates placed equally as a form of a cube. As same as the cube#1, the transparency of the plates deludes the eyes to see through the layers, and the space is blurred out. When the dot stickers are applied on all planes, and the dot clusters engage the layers, the eyes instantly perceive the depth of space and mass by comparing the positions of the dots on each layer.

The frame: An area in the frame of the artworks has been occupied by dot stickers, depicting the image of clusters expanding in space. The dot clusters are positive elements that occupy negative space. The intention of this artwork is to arouse the audience to make a decision where to select the clean space to pin as more and more dots are pinned, the clean area of negative space will reduce, and the clusters become larger until they occupy the whole space. The implied meaning of the art is as in the situation of Covid-19, when infected people increase, in some cases as a cluster. We have to choose the safest place for ourselves. Therefore, in this experiment of space, some interactions between the negative and positive space, the art piece and the audiences are created.

used in this artwork consist of 2 parts:

Dot stickers are used as experiment elements for attaching on space surfaces to portray the clusters of occupiers in the space as well as represent the marks of cleanliness approval.

Part2: 2 acrylic cubes and a frame (the space):

Mix media: Dot stickers attached and pinned on the surfaces of the acrylic cubes and frame. (The audiences are allowed to participate in the interactive process, creating of artworks, experimenting, and observing the phenomenal of space simultaneously.) 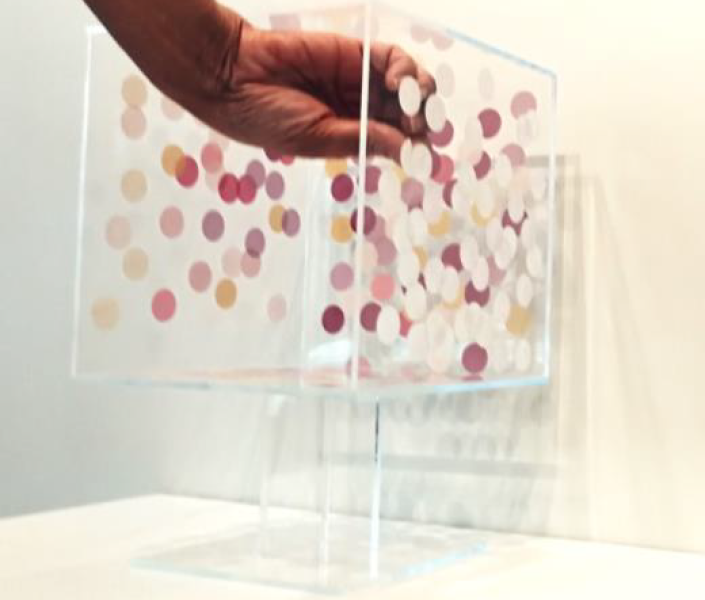 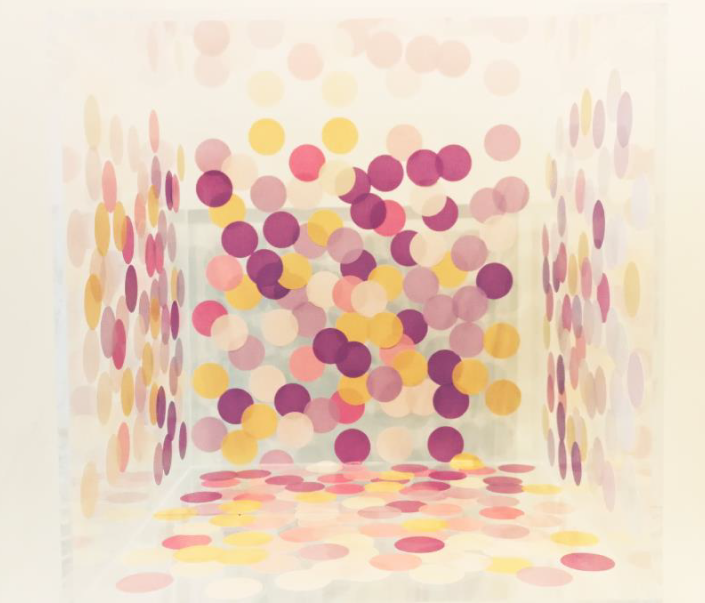 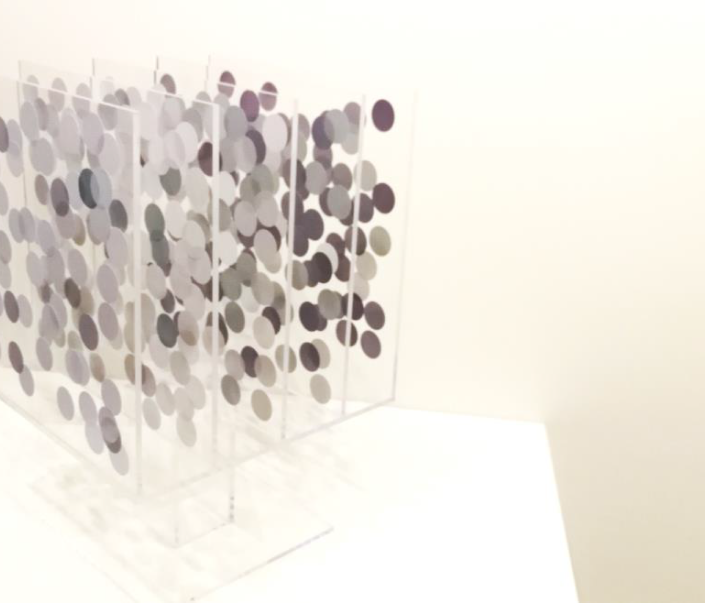 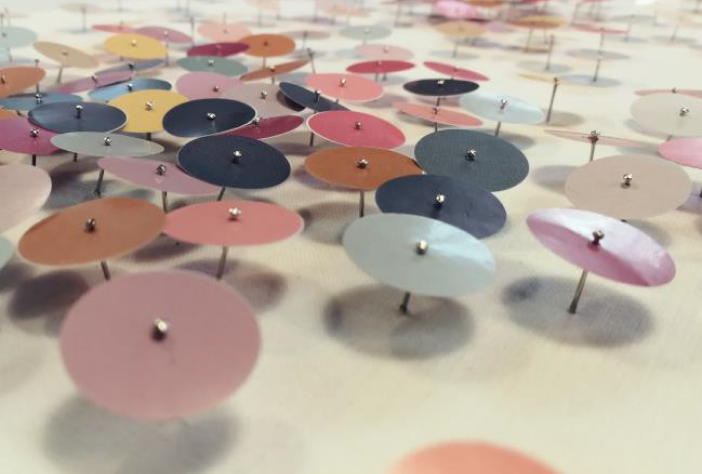 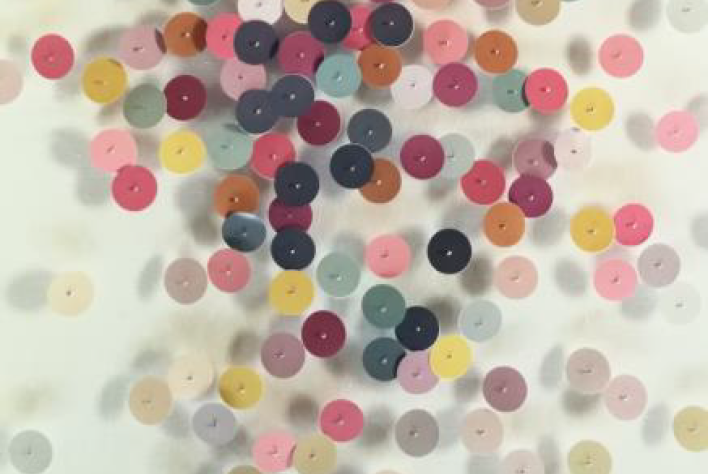